Here is a video demonstrating both the myVidster Android and iPhone app.


I was working on a shorter video but I kept messing up and I rather get the app to the beta testers then to worry about posting another video.

This is a private beta, only users with a PRO account can access the app.  PRO users can report any issues by commenting on this blog post or by contacting me directly.  When providing feedback please be descriptive of the problem.  Saying 'it does not work' does not help me much.  Include detail information like what version of Android/iPhone you are using and any error messages.  Also provide feedback on what additional functionality you would like for me to add.

OK that is all for now, I am exhausted!  Building a mobile app is not an easy task and I hope you all enjoy it!

Update: Issue Tracking
30-Aug-2011: I discover a possible memory leak which causes the video page to load the same video even if you select a different video.  I am working on a fix.
Posted by MyVidster at 12:45 PM 291 comments:

The Art of Adding a New Feature

Social media and network services (like myVidster) typically follow the same core concept.  Bringing people together with similar interests and/or relations to communicate and exchange information.  What sets each service apart is its implementation of features and tools.  The features you decide to develop and how you integrate them into your web service is how you set yourself apart from the competition.

Some take the 'easy' route and attempt to copy (or clone) an entire web service.  This method only works if your service is targeting an audience that the other service cannot reach or support.  An example would be to clone Facebook for a country that has blocked the Facebook domain.

External vs Internal
Most share buttons are designed to be placed on external websites to drive traffic to your website.  The myVidster share button is an internal button that user's use to share video bookmarks with other users.  This increases user interaction at the expense of losing potential traffic from external websites.  In the future I might push out an external share button for webmasters, but I felt that focusing on user interaction was of higher importance.

User Interface (UI)
Lets say user A wants to share a video bookmark with user B; how is this accomplished?  UI is what makes or breaks a new feature.  Will the share button be a button or link?  Where do I place the button?  Do I send the user to another page or present a popup display when they click the button?  I decided to replace the shuffle button with the share button and present a popup display when clicked.  The shuffle button was rarely used and was redundant due to the shuffle wall feature that I released over a month ago.  This also keeps the UI clean.  That was the easy part; how does user B get notified that user A has shared a video?  This question tabled the share feature for months.  One idea I had was to add the shared videos to the users subscriptions or to create a new page exclusively for shared videos.  I did not like either idea and it was not until I started working on user notifications where the it all fell together.  Video sharing would be an notification activity!  Grouping video sharing into notifications just made sense.  The user does not have to navigate to a new page and it felt more intuitive.

Final Test User Engagement
Since the launch of the share button, its usage has been increasing every day!  If the usage rate slows down or goes negative then you need to reevaluate and determine if it needs to be change to help encourage its usage or to scrape the feature completely.  Some webmaster have an issue with dropping features.  Maybe its ego and dropping a feature is admitting that you have devople something that no one wants to use.  Remember "less is more" and the best sites are the ones that offer features that the user wants and not the features that the webmaster wants.
Posted by MyVidster at 12:22 PM 132 comments:

Email ThisBlogThis!Share to TwitterShare to FacebookShare to Pinterest
Labels: development 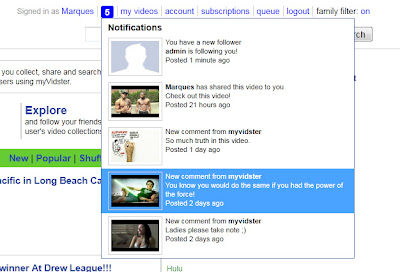 myVidster now provides notifications!  Notifications are display on the top menu bar as a number in a blue box.  The box turns grey when there are no new notifications.  Here is the break down on the notification types.

Comments:
When a new comment for a video is posted, a notification is sent to all users who have bookmarked the video.

Share:
You can share any video bookmark on myVidster to other users and to all of your followers.

Followers:
When a user follows your collection or channel, you will be notified. 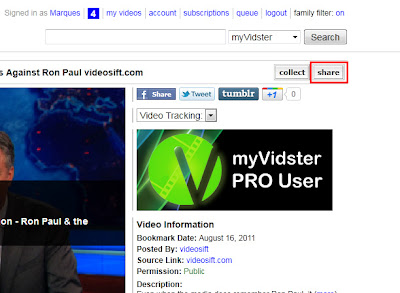 I might add more notifications in the future, if it provides value to the user experience. Please provide suggestions and your thoughts as well.

Email ThisBlogThis!Share to TwitterShare to FacebookShare to Pinterest
Labels: updates

As mention in a previous post, the most requested featured from the myVidster community is a mobile app.  I have held off from creating an app because I felt that mobile and video technology needed to mature.  When you are a one man shop, you need development tools and frameworks that are both stable and robust so that you can push out a good product in a reasonable amount of time.  Here are few teaser screenshots, please note that this is an early development version and will most likely not reflect final version.
For those who would like to get their hands on a beta copy, I will be providing access to the beta version to the myVidster PRO users.  The beta version will be available to the PRO users by the end of August.  Everyone else will have to wait till the app goes public.  The final version will be a free app supported with ads. PRO users will get an ad free version.

Till next time, keep collecting!

Welcome to the development blog of myVidster. myVidster is a social video bookmarking project that I started in Feb 2007. The idea of the project occur when I needed a way to show off my collection of videos (from various sources) to a small audience of visitors from another website that I manage. This is a self funded and solo project.